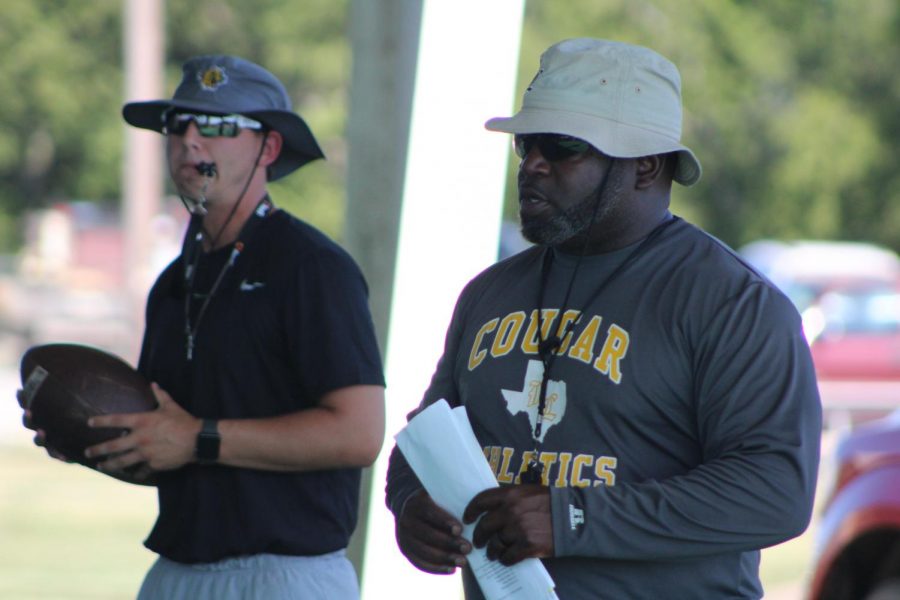 Coach Williams directs his players during a practice.

Rosebud-Lott High School is gearing up for the 2019-2020 school year, including the athletics department. The football and volleyball teams have been hard at work, preparing for their upcoming seasons.

The Cougar football team starts the year with new leadership in the form of Rafael Williams. Coach Williams has been at Rosebud-Lott for four years as an assistant coach to Coach Brad Ballard, but this year begins his tenure as head football coach.

“I am grateful for this opportunity to be the Head Coach here at Rosebud-Lott High School,
said Williams. “ I was able to play college football at the University of South Florida. Also being a military veteran and teacher/coach for 12 years have prepared me to be a leader and help teach young men how to lead.”

“One of our goals is to develop leaders that lead not only with words but actions,
said Williams. “Character is another area that we want to improve on. I believe that character development not only helps you become a better football player, but person as well.”

Williams begins the year with a slew of returning athletes to the team with varying talents. Returning to the varsity this year are John Paul Reyna, Damonte Hargrow, Riley Watts, Kenneth Benson and Jacob Nutt on the line. Senior Adrian Valdez also returns in a new position for the 2019 season. With so many new faces coming into the game, coaches are looking to place players in the best spot for them, changing the line-up.

“Positions are fluid right now as we have a lot of things that need to be worked out,” Williams said. “But Adrian Valdez will move from tight-end to running-back this year.”

Even though the team has several leaders and leading rushers from last year, district play will still be tough. Teams from Holland, Thorndale and Hearne have shown in the past a challenge for the Cougars.

“Our district is going to be tough,” Williams said. “We have multiple teams that have some very good players coming back.”

With this in mind, the Cougars are working on both offense and defense. One of the major goals of this year, according to Williams, is to be more physical and stronger upfront with both Offensive and Defensive lines.

With the addition of a new coaching staff and the character building classes Williams has implemented, the football team looks to have the makings of a great team. But, the main goal is to always focus one game at a time.

“To play hard in every game is the main goal,” Williams said. “If we are able to do that, winning games and playoffs will take care of themselves.”